Steltzner unabashedly acknowledges, however, that his teenage self never would have anticipated such a career. Book-learning was a struggle throughout his childhood, and early mentors weren’t terribly encouraging. An elementary school principal suggested that he wasn’t very bright, and — as Steltzner recalled, in an August 2012 National Public Radio interview — a high school geometry instructor “passed” him the second time around, after a first-time flunk, with a grade of F-plus … “because the teacher just didn’t want to see me again.”

After stumbling out of high school, Steltzner’s ambitions went no further than playing bass and drums in various new waves bands; a brief flirtation with jazz, during a short stint at Boston’s Berklee College of Music, did nothing to change this fixation on sex, drugs and rock ‘n’ roll. 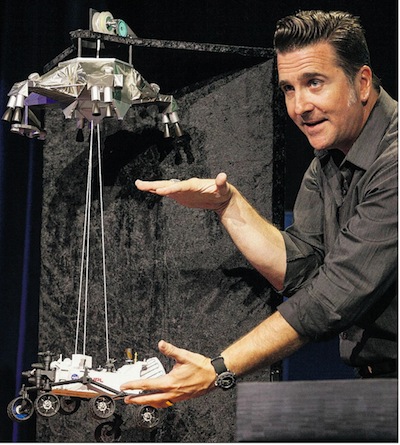 Then, returning home from a gig one night in 1984 or thereabouts — the exact timeframe remains a bit fuzzy — Steltzner became entranced by the constellation Orion. He tried to enroll in an astronomy class at the College of Marin, but prerequisites demanded a physics course; that, in turn, necessitated a re-evaluation of his negligible study skills. Not a problem, because Steltzner quickly experienced the epiphany that has transformed many lives before his: What people resist doing by rote and requirement, they’ll cheerfully embrace through passion and curiosity.

Academic commitment became a full-time passion in 1985. The UC Davis undergraduate degree was followed by a 1991 master’s degree in applied mechanics, at Caltech; and a 1999 PhD in engineering physics, at the University of Wisconsin-Madison (where he became an award-winning teaching fellow). By then, he’d also been a member of NASA’s Jet Propulsion Laboratory for eight years, working in the Spacecraft Structures and Dynamics Group. Early projects included Galileo, Cassini, the Mars Pathfinder and Mars Exploration Rovers. An episode of the PBS series Nova — “Mars: Dead or Alive,” which aired Jan. 4, 2004 — profiled several scientists and engineers who worked on the successful Martian rovers Spirit and Opportunity; Steltzner was prominent among their number, in part because his rock ‘n’ roll background, pierced ears, snakeskin boots and duckbill haircut made him such a colorful figure.

He has done nothing, subsequently, to discourage this hipster-turned-rocket scientist image. In fact, the stage presence cultivated during his early rock club career has served him well, as he has become one of our space program’s most visible and media-savvy advocates. NASA’s Seven Minutes of Terror — a five-minute video that has become a YouTube sensation, with more than two million views — gets much of its gravitas from Steltzner’s on-camera narration. Indeed, with his friendly, well-modulated voice, earnest command of scientific detail, and “common man” persona, Steltzner easily could become the new century’s Carl Sagan.

For Curiosity, Steltzner and his colleagues spent a decade designing, building and testing a crazy-quilt landing system that even Rube Goldberg would have rejected as too far-fetched. Steltzner cheerfully admits as much, in Seven Minutes of Terror: “It looks crazy. Sometimes when we look at it, it looks crazy.” Curiosity’s way-outside-the-box lander had to handle a rover than weighed roughly one ton, about five times as heavy as Spirit and Opportunity. Neither parachutes nor airbags would work in the thin Martian atmosphere, so Steltzner and his team — at one point, almost 2,000 people — devised a rocket-powered “platform” that hovered over the planet’s surface and lowered Curiosity down on a cable.

“Rover on a rope,” as somebody infamously jeered.

Maybe so, but Steltzner had the last laugh; Curiosity’s successful landing represents a triumph of ingenious design for the former high school near-dropout who earned his own chapter in the 2004 book, Going to Mars: The Stories of the People Behind NASA’s Mars Missions. The chapter title? “Elvis,” of course, after the rock ‘n’ roll god whom many say Steltzner resembles.

At home in his small bungalow in Pasadena, Calif., Steltzner takes an equally curious and investigative approach to the contents of his garden — tomato bushes, apricot trees, kafir lime bushes and zinfandel grapes, among other tasty treats — in order to blend (as one example) the perfect apricot jam.

“It feels good to make, to create, to improve,” he said, during another interview in August 2012. “To imagine the world as I think it should be, and then to try and make it that way.

“Engineering is a creating thing. That’s what I love most about it.”

NPR News: Crazy Smart: When A Rocker Designs A Mars Lander
Video: Challenges of Getting to Mars: Curiosity’s Seven Minutes of Terror