Students in the UC Davis Materials Science and Engineering program can credit their presence to Amiya K. Mukherjee, who became one of the program’s founding members when he joined the College of Engineering faculty in 1966, as an assistant professor in the fledgling Department of Mechanical Engineering. The department’s identity morphed a few times during subsequent years, and in 1993 became part of a merged Department of Chemical Engineering and Materials Science. Dr. Mukherjee remained — and continues to remain — an integral part of the department, now as an distinguished research professor. 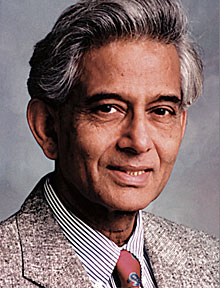 Mukherjee obtained his undergraduate degree in 1954, at the University of Calcutta. He subsequently earned a master’s degree in physical metallurgy in 1959, at the University of Sheffield, England; and a doctorate in 1962, at Oxford University. He spent the next three years as a post-doctoral fellow at UC Berkeley’s Department of Mineral Technology, and as a research metallurgist at the Lawrence Berkeley National Laboratory. He then served a one-year stint as a senior scientist in the Metal Science Group at the Batelle Memorial Institute, in Columbus, Ohio.

Mukherjee was promoted to associate professor only one year after joining the UC Davis College of Engineering in 1966, and in 1970 he was named a full professor. He very quickly garnered recognition as an instructor who connected with his students, and received an Outstanding Teacher-at-Large Award in 1975, followed by the Academic Senate’s Distinguished Teaching Award in 1978. These early honors would be followed by the 1992 ASM International Albert Easton White Distinguished Teacher Award, the 1993 University of California Foundation Prize and Citation for Distinguished Teaching and Scholarly Achievement, and the 2005 Academic Senate Distinguished Graduate Mentoring Award.

When the latter award was presented, Mukherjee was cited for having inspired a generation of students to become scientists, managers and professors at the top of their fields. “Current and former students praise his enthusiasm, and his ability to motivate students and staff,” noted the award announcement, “along with his willingness to involve students in all aspects of academic work.”

“Such work has an enormous potential for applications as lightweight, high-strength structural materials,” Mukherjee said years ago, while explaining one facet of his research in a 1999Los Angeles Times article. “A typical example would be the metallic neck braces worn by people with whiplash injuries, where the total weight of the device can be reduced by about 70 percent, without sacrificing strength.”

One of Mukherjee’s recent honors also is among the most prestigious. In early 2012, the Materials Research Society (MRS) named him a new Fellow, recognizing his “sustained and distinguished contributions to the advancement of materials research.” Only 0.2 percent of current MRS members receive this honor.

He also received the Federal Republic of Germany’s Alexander von Humboldt Senior U.S. Scientist Award in 1988, and then again in 1997; the 1990 University of Tokyo Centennial Gold Medal, the 1996 University of Moscow Bochvar Medal in Metal Physics; and the 1997 Institute Medal from the Max-Planck-Institut für Metallforschung.

The Bochvar Medal was minted only once: Following tradition, Mukherjee will return the medal to the University of Moscow after his retirement, so it can be given to the next recipient.

He has authored hundreds of publications, and his name is on 10 patents issued between 1998 and ’07.

Mukherjee also has served UC Davis with distinction, as a member of numerous committees and in various departmental capacities over the years. As just a few examples, he chaired the College of Engineering Library Committee from 1975 to ’77; was part of the Teaching Resources Center’s Faculty Mentor’s Program from 1991 to ’94; was a member of the Academic Planning Council from 1994 to ’95; and served on the Committee on Academic Planning and Budget Review (CAPBR) in 1998.

As his students and colleagues have known for years, Mukherjee’s tireless efforts have contributed greatly to both the College of Engineering and the entire UC Davis campus.