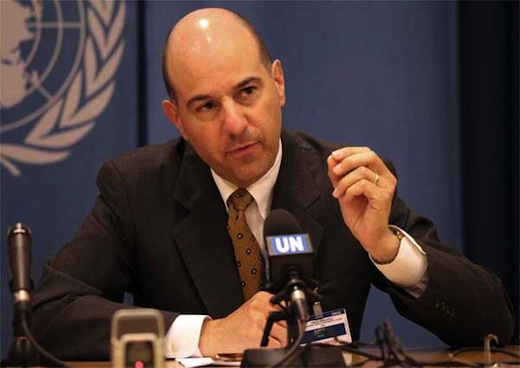 David Kappos’ high school advisors warned him not to think too ambitiously. He came to UC Davis with a respectable grade-point average; then, during his first quarter, he scored an A-plus — well above the rest of the class — in a chemistry course taught by Professor Dino Tinti (later emeritus).

“He said, ‘You could have a future,’ ” Kappos recalled, in a 2010 interview. “That was the first time an academic in a position of authority had said that to me, and it had a big impact.”

In August 2009, Kappos became the Under Secretary of Commerce for Intellectual Property, and Director of the United States Patent and Trademark Office.

In April 2010, Kappos visited UC Davis to discuss his view that when transferring technology from the laboratory to the marketplace, universities must champion a new method based on long-term relationships with commercial partners. The idea is to simplify negotiations and quickly introduce inventions into the community: an approach that can generate more funding than if universities rely solely on long-shot “blockbuster” patents to pay off.

Kappos also encourages “humanitarian IP”: innovative licensing models that make products available at low cost. One such example is the San Francisco Bay Area’s Gilead Sciences, which has licensed Indian companies to manufacture its anti-human immunodeficiency virus drugs for export to Africa, while charging only a modest royalty payment.

When relaxing at home, Kappos’ favorite sport is ice hockey, and he cites Sherlock Holmes as his “favorite fictional inventor.” He regards Jules Verne as the world’s most significant science fiction visionary, but refuses to choose between Star Trek and Star Wars. (“They’re both great!”)

In June 2011, Kappos gave an address to graduates of the UC Davis College of Engineering. No doubt recalling the encouragement he had received, years earlier, he was similarly inspiring to this next generation:

“The power to innovate is the power to lead,” he said, “by creating, solving and doing.”