POTENTIAL FETAL HYPOXIA IS ONE REASON surgeons rush in to perform a C-section. Currently, doctors assess the baby's well-being using electronic fetal heart rate monitoring (EFM) during labor and delivery. As of 2016, data published in Clinical Obstetrics & Gynaecology showed that 30 percent of babies delivered in hospitals in the U.S. are detected as potentially hypoxic, but 60 percent of those detections are false alarms that can lead to unnecessary C-sections.

UC Davis Electrical and Computer Engineering Professor Soheil Ghiasi's lab has built a transabdominal fetal pulse oximeter (TFO) to measure a baby's blood oxygen saturation levels non-invasively. A new father himself, he credits the birth of his young daughter with inspiration for this research, which is supported by grants from the National Science Foundation and the National Institutes of Health.

Ghiasi expects this technology to be adoptable by many medical facilities worldwide.

"From my observations, nurses and obstetricians are well trained on how to use fetal monitoring devices, and this is something to which they can easily adapt. Placing TFO on the abdomen is similar to placing ultrasound transducers currently used for fetal monitoring at hospitals. A friendly graphical user interface can provide easy access to fetal oxygen saturation numbers outputted by the TFO and help with the adaptation. Additionally, TFO is composed of off-the-shelf components and is relatively low-cost.” - Dr. Soheil Ghiasi

Begum Kasap, a Ph.D. student, working on the project, explains the concept behind the TFO technology. "The technology works by placing multiple near-infrared LED light sources and a pair of photodetectors on the mother’s abdomen placed at 'near' and 'far' positions. The measured reflected light at the near detector is impacted only by the mother’s tissue layers, and we use that as a baseline. The light at the far detector travels through both maternal and fetal tissues. 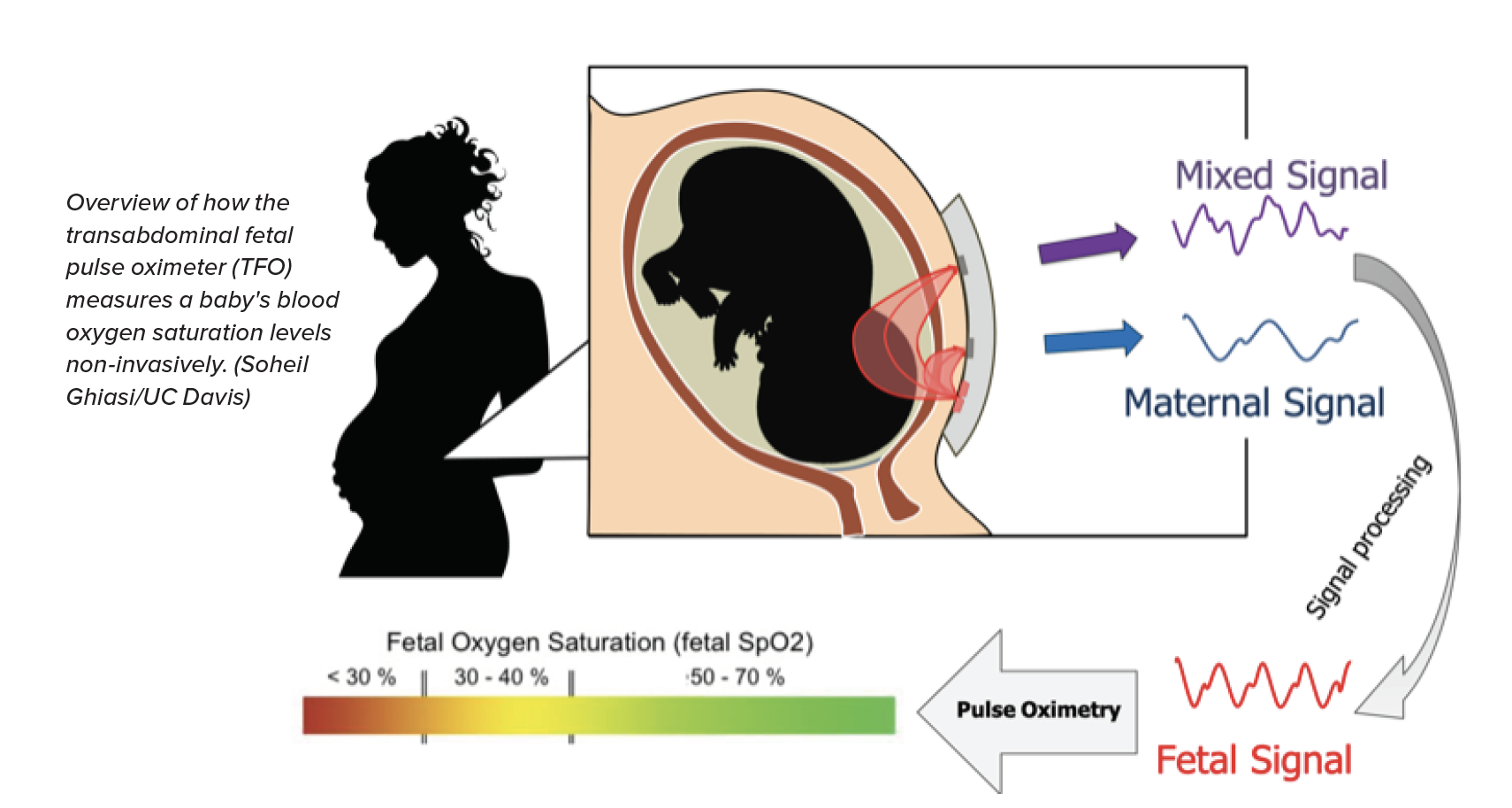 Kasap explains further, “Light is absorbed at two different wavelengths, by oxygenated and then by deoxygenated blood. Comparing the amplitudes of the signals at each wavelength can say how much blood is oxygenated vs. deoxygenated.”

They are currently testing the accuracy of the fetal oximeter in pregnant ewes, in collaboration with Diana L. Farmer, a fetal surgeon at UC Davis Health.

Kasap says, “With the facilities available here, UC Davis is uniquely a good place for any research that involves both animals and humans.”

"We have conducted thirteen animal studies with various prototypes of the TFO device since 2019, thanks to all of these collaborators. Our latest animal study showed that our TFO could measure fetal oxygen saturation with about 10 percent mean absolute error," explains Kasap.

Accessing reference oxygen saturation values is necessary to characterize and calibrate any pulse oximetry system. To accomplish this, researchers can draw blood from sheep fetuses during the study to compare actual fetal blood oxygenation data with observations from the TFO technology. The procedure follows a strict protocol, approved by the UC Davis Institutional Animal Care and Use Committee, where the sheep are under anesthesia.

In March 2022, researchers began observing the workings of this device in pregnant ewes undergoing contractions. “This is intended to be used in the delivery room during labor,” says Begum. “So, we need to see how uterine contractions affect oxygenation levels and device function and see what’s normal for blood oxygenation levels.”

In a separate 2022 study, researchers will compare the oxygenation levels suggested by the device with those of fetal lambs to determine whether the TFO can accurately detect fetal hypoxia. In collaboration with UC Davis Health, researchers will observe ten ewes, one per week, for the ten weeks. They expect to have results to report in summer 2022.

In 2021, this new oximeter was tested on a small group of humans in collaboration with Herman Hedriana, director of Maternal-Fetal Medicine at UC Davis Health. Healthy near-term pregnant patients coming in for their non-stress test (NST) visits were recruited for the study, approved by UC Davis' Institutional Review Board and conducted at UC Davis' Medical Center.

The evaluation of TFO for use in prenatal testing is an important step towards its integration into hospitals for fetal monitoring during labor and delivery. However, because researchers cannot draw blood from human fetuses during NST, the performance of TFO in this study is evaluated using proxy metrics, such as fetal heart rate and maternal heart rate.

The device has been tested with patients with darker skin tones, and it has proven less accurate than those with lighter skin. "More light gets absorbed while passing through the body of someone with a darker skin tone, so less light is reflected to the surface, making it harder to obtain observations," said Kasap. To correct this, they've made it possible to adjust the brightness of the LED light source. However, there's a safety-related upper limit on brightness to avoid the possibility that the LED in contact with someone's body will overheat.

Since 2018 researchers have been improving the device’s electronic circuitry. It’s now less sensitive to 'noise' - other things the sensors pick up that have nothing to do with fetal blood oxygenation - and can work with lower light levels.

They are also incorporating machine learning for analysis and training a neural network to estimate the oxygen saturation levels that correspond with their light absorption measurements. “Usually, when we’re estimating blood oxygenation this way, we’re looking at the tip of someone’s finger. Now we are passing light through both a mother and a fetus, and the data is becoming more complicated.”

Ghiasi, Kasap and other collaborators actively recruit patients at the UC Davis medical center for further oximeter tests during labor and delivery. Their goal is to expand and diversify their pool of human subjects in 2022.

Kasap says that she enjoys working on an electrical engineering project related to human health. “Both Professor Ghiasi and I find this work very impactful. Lots of people will use this device, and it will help them. It’s practical, not just theoretical, grounded in the real world.”

She points out that building the sensor is an electrical engineering project. “It’s an electronic circuit detecting data that we’re analyzing through machine learning. It just happens to have a biomedical application. And I love that I’m not just building a small component of something, that I can see the whole project and how everything will be used.”

Electrical and computer engineering Engineering for All Advancing Human Health

Cyborg Cells Could Be Tools for Health and Environment