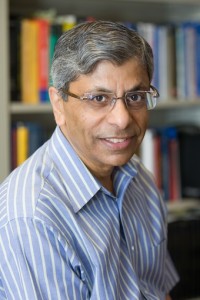 In the spring of 2013, Bhattacharya demonstrated how a simpler, more efficient single-photon emitter could be made using traditional semiconductor processing techniques: a development that could enhance the practicality of the advanced form of secure communications known as quantum cryptography. For this process to work, it’s necessary to encode the message — such as a bank password or a piece of military intelligence — just one photon at a time. In this manner, both sender and recipient can determine whether anyone has tampered with the message.

One month later, Bhattacharya led a group of four students in a project that successfully demonstrated the first polariton laser. Because such a laser is powered by electricity, rather than light, it is far more energy-efficient than conventional lasers. A polariton laser has the potential to be used in place of the existing lasers employed for optical communications in the wired Internet. Because of a polariton laser’s ability to modulate, the project also could make lasers useful in future developments in the consumer electronics field.

Bhattacharya is a member of the National Academy of Engineering, and a Fellow of the IEEE, the American Physical Society, the Institute of Physics (UK) and the Optical Society of America. His many honors and awards include the John Simon Guggenheim Fellowship, the Heinrich Welker Medal, the IEEE Nanotechnology Pioneer Award, and the Kennedy Family Research Excellence Award. His textbook, Semiconductor Optoelectronic Devices — updated in 1996 — remains a seminal reference in its field.

Bhattacharya received the M. Eng. and Ph.D. degrees from the University of Sheffield, UK, in 1976 and ’78, respectively. He joined the University of Michigan faculty in 1983, after a short stint at Oregon State University, Corvallis. From 1981 to ’82, he also was an Invited Professor at the Ecole Polytechnique Federale de Lausanne, Switzerland.