Numerous UC Davis College of Engineering faculty members and alumni have made discoveries that are out of this world, but only a few enterprising souls have ventured out of this world themselves. 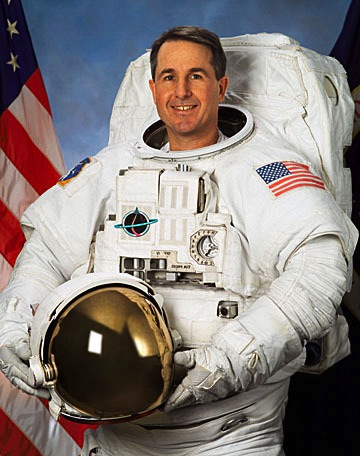 Stephen Robinson is one of those few. The Sacramento native, who graduated from UC Davis in 1978 with a dual bachelor of science in mechanical and aeronautical engineering, is a veteran NASA astronaut — or “Aggienaut” (alumni-turned-astronaut), as campus publicists prefer — with four shuttle missions to his credit. The fourth trip, in February 2010 on the shuttle Endeavor, involved a visit to the International Space Station.

As a UC Davis undergrad, Robinson played the sousaphone in the Cal Aggie Marching Band-uh and took various jobs at the university airport. He also began working at NASA’s California-based Ames Research Center in 1975. Shortly after graduating, Robinson joined NASA full-time as a research scientist in the fields of fluid dynamics, aerodynamics, experimental instrumentation and computational scientific visualization. He “moonlighted” by earning master’s and doctorate degrees from Stanford, with a research emphasis on turbulence physics and human eye dynamics.

Apparently not needing to sleep, Robinson also founded and operated an engineering and graphics software firm in Mountain View, Calif., from 1982 to ’86. In 1990, he was selected as chief of the Experimental Flow Physics Branch at NASA’s Langley Research Center, in Virginia. Three years later, he was awarded the NASA/Space Club Low Memorial Engineering Fellowship, and assigned to MIT as visiting engineer in the Man Vehicle Laboratory. He returned to NASA’s Langley facility in 1994, and his first space mission took place in August 1997, on board the shuttle Discovery. His second and third missions, also on Discovery, followed in late 1998 and the summer of 2005. He ultimately logged more than 1,156 hours and 19.8 million miles in space.

Robinson has returned to UC Davis many times over the years, mostly to give enormously popular talks about his exploits. A 2005 appearance filled the Mondavi Center’s Jackson Hall; an April 2010 presentation, as part of the College of Engineering’s Dean’s Distinguished Lecture Series, featured a slide show that concluded with an image of a UC Davis flag … in outer space.

Recognizing the need to encourage future generations of scientists, Robinson also sponsors a UC Davis scholarship fund for engineering students in financial need. Robinson serves as department chair and professor in the College of Engineering’s Department of Mechanical and Aerospace Engineering.

Yayoi Takamura: Shaping the Future of Materials Science and Engineering