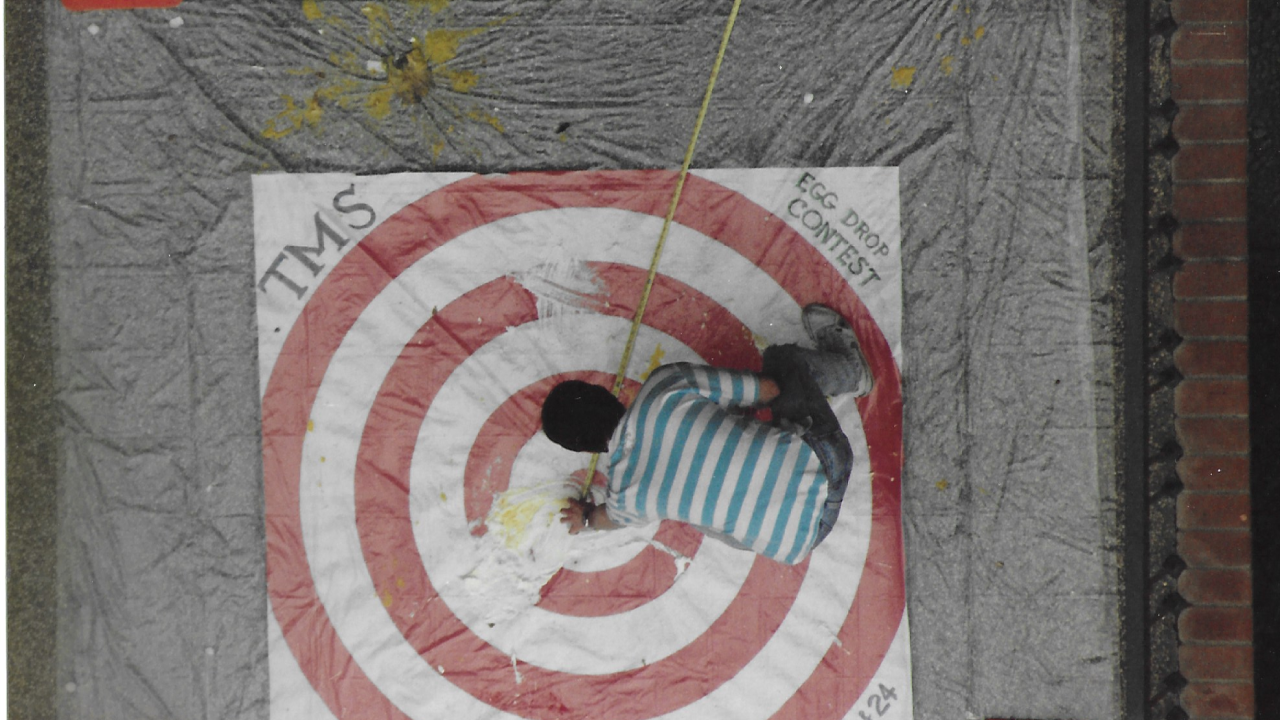 I thoroughly enjoyed my experience becoming a materials engineer at UC Davis. Currently, I am president of Elcon Precision in San Jose, CA. Elcon Precision is a materials science manufacturing company that makes space, medical and radio frequency technology products. As a team of materials scientists, we ensure success in critical applications that directly contribute to the preservation and betterment of human life. I have many fond memories of the UC Davis campus, culture and the fantastic people I met while getting my education.

One of my favorite campus events at UC Davis was the annual Egg Drop contest. Every year, it was held in February during National Engineering Week. In 1989, I was elected President of the UC Davis materials science club, The Minerals, Metals and Materials Society, along with my classmate Andrew Olander (B.S. ‘90, materials science and engineering). Our faculty advisor was Professor and Interim Dean Jeffery C. Gibeling, and ironically, although we were a small club, we ran the largest event of E-Week: the annual TMS-UC Davis Egg Drop contest. This contest is the ultimate teaching tool for mission critical engineering, in which creativity, science, resourcefulness and luck combine to achieve a single purpose: safely transport a raw egg down a six-story building to the center of a target less than two meters wide. 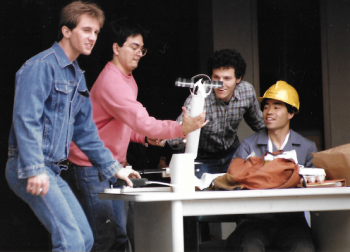 Planning for the event started months beforehand with registering the event with campus clubs in the Memorial Union. The folks in the MU seemed to know nothing of our club or materials engineers; however, they all knew about and liked the Egg Drop Contest, which made registration easy! We reserved the front steps of the Physics Building for the February 22 event and secured walkie talkies from campus security. We now had official campus permission to throw stuff off the Physics Building!

The Physics Building is perfect for an egg drop contest: it’s six stories tall, has an elevator and the roof has a one-meter high parapet around the perimeter. The main entrance steps to the building lead to a mezzanine area perfectly sized for the drop zone, almost like it was designed with the event in mind.

In December 1989, we started to promote the event around campus. First, we held a contest for a new t-shirt design. The winning design was made by Mike Meier (M.S. ‘86, Ph.D. ‘91, materials science and engineering) depicting a half-circle of egg spectators nervously observing a confident-looking egg descending into a target supported by a parachute. The t-shirts were a hit and sales helped us fund the event. Second, we posted colorful fliers featuring event sponsors such as Woodstock Pizza and Colleen’s Creamery around campus (this was before email or web marketing). 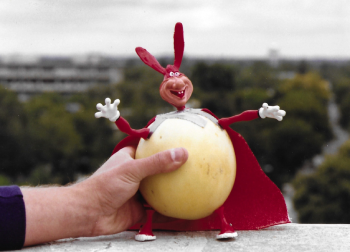 The rules for the egg drop contest were simple and we used a point scoring system, with a maximum possible score of 100 points. All crafts and documentation (some folks provided calculations) had to be delivered to Bainer Hall two days before the event for judging and weighing. For safety, all crafts had to weigh less than 1,000 grams. Up to 10 points were awarded for the design, another 10 points for crash worthiness and 20 points for accuracy. If you missed the target entirely, your accuracy score was zero. If your egg survived, you were awarded 50 points. Therefore, it was impossible to win the event if your egg broke. Design scores were subjective and determined by Professor Gibeling.

The diversity in egg drop contest entrant designs was impressive and reflected the passion and creativity of UC Davis students. Engineering students from all disciplines participated in the event; therefore we saw a multitude of different solutions to safely transporting an egg down a six-story building.

As we all know, engineers can be competitive, so small teams formed and worked to outdo each other. Engineers are also resourceful: it seemed like anything that could be found around campus ended up being incorporated into an egg vehicle. Indeed, we saw plastic bags, drinking straws, salt and pepper shakers taken from the Coffee House, paper towel tubes, foam from car seats, fruits and vegetables, rubber bands, teddy bears, lots of glue and copious amounts of duct tape used in the design and build of vehicles (crafts). In 1990, we had more than 75 entries from UC Davis students and 10 entries from elementary schools.

Thursday, February 22, 1990 had finally arrived, and we were excited. It was a cold winter day and we were lucky to have clear weather without any strong winds. Late in the morning, the TMS team assembled at the base of the Physics Building to set up for the event. My twin brother, Ken Dyer (B.S. ‘90, electrical engineering, M.S. ‘93, engineering, Ph.D. ‘98, electrical engineering), also helped us set up and install the official target. The centerpiece for the contest is a two-meter diameter target consisting of red and white concentric rings held down by four orange cones. Since the event can get messy, we covered the target with a large plastic drop cloth.

Harold Kwan (B.S. ‘90, mechanical engineering/ materials science and engineering) and Tricia Clinton (B.S. ‘90, materials science and engineering) staffed the entry table located safely away from the target. All contestants were required to pick up their official contest eggs, all serial numbered, from the entry table to load them into their crafts at the event. All participants were allowed up to five minutes to load their egg into their vehicle to avoid disqualification. 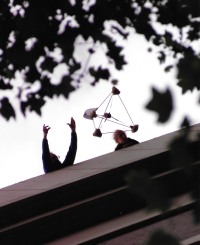 Around noon, spectators started to assemble in anticipation for the event. Playful and excited local elementary school students soon arrived and settled in groups next to the Physics Building. The parking lot adjacent to Mrak Hall filled up with school buses—many more than we had expected—causing some complaints from campus parking. At 1:00 PM, we started the event with the first crafts being hurled off the roof of the Physics Building. We used official campus walkie talkies to regulate craft traffic and maintain safety in and around the drop zone.

The crowd rapidly grew since the event is quite a spectacle. As each craft was launched and landed, the enraptured crowd cheered loudly for each craft, especially if the egg survived. By 2:00 PM, the grassy area in front of Bainer Hall was packed with people: a standing-room only crowd. Unexpectedly, news trucks from local channel CBS13 and CNN appeared around the periphery of the crowd. TV cameras and reporters filmed the festivities and interviewed both elementary school and UC Davis students. Event turn out exceeded our expectations and the crowd was (thankfully) well-behaved. 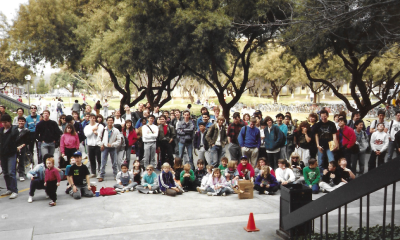 At the end of the contest, winning Droppers were given their prizes and complimentary event t-shirts. We also awarded prizes and t-shirts to the elementary school participants. The TMS club team was tired from all the work and excitement, but deeply satisfied for running such a successful event. That evening, Professor Gibeling received a call from Professor James (Jim) Shackelford informing him that he was pleasantly surprised to see UC Davis College of Engineering, the Egg Drop Contest and our little TMS club featured on CNN.

I will never forget the fun I had during the 1990 egg drop contest and the annual event continued to be hosted by the TMS club until 1994. After that, UC Davis electrical engineering students ran the event until 2004. I still love to visit the campus and continue to support the UC Davis College of Engineering today. The Egg Drop contest taught me how both careful materials selection and well engineered designs work together to create a successful product where mission failure is not an option.