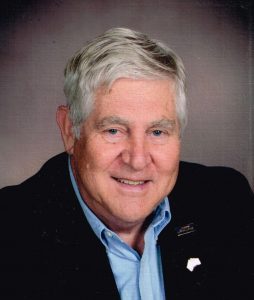 Brian Horsfield earned his doctorate in agricultural engineering at UC Davis in 1971. During his first faculty assignment at Purdue University from 1970-74, Horsfield worked with Indiana farmers to improve manure disposal methods to meet stricter environmental standards. He also helped plan new farmstead layouts after some farms were devastated by tornadoes. He joined the UC Davis Department of Agricultural Engineering in 1974, where he led research into alternative fuels using agricultural byproducts. Horsfield was later hired by the Weyerhaeuser Company, where he became a vital member of the company’s research and development team in Tacoma, Washington. Several of his 11 patents involved the development of recyclable produce boxes to replace the traditional, non-recyclable wax-saturated boxes used for transporting certain produces. He retired from Weyerhaeuser as a senior R&D project engineer in 2008 and returned to Davis with his wife, Louanne, whom he met at UC Davis in 1966.