All dedicated university instructors understand the importance of mentoring their students, but few have embraced this responsibility as seriously — or with as much imagination — as Biswanath Mukherjee, a distinguished professor in the UC Davis Department of Computer Science. He views teaching as just half of an equation that places equal importance on the need for students to understand how best to absorb instruction, configure it to their individual goals, and then successfully make their way in the professional world. 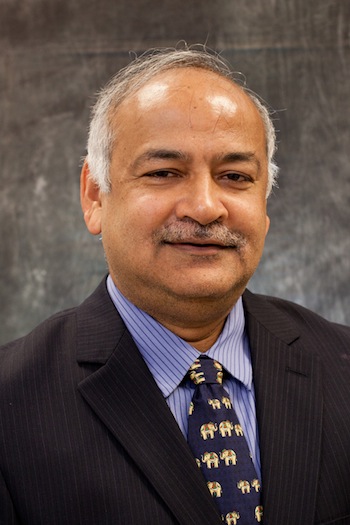 Mukherjee has exploited various mediums to get this message across, most recently by allowing an instructive 2010 lecture — titled How to Be a Good Graduate Student — to circulate on the Internet, as a YouTube video.

No surprise, then, that Mukherjee earned a 2004 Graduate Mentoring Award, granted by the UC Davis Academic Senate on the basis of how an instructor encourages intellectual growth, offers accessibility to students, and demonstrates quality scholarship. In 2009, he also was honored with the UC Davis College of Engineering’s Outstanding Senior Faculty Award.

During his career at UC Davis, Mukherjee has supervised to completion the doctorate dissertations of nearly 50 students, and currently is supervising roughly 20 Ph.D. students and research scholars. His students typically achieve a high rate of productivity, publishing in from three to five journals per year; over time, many students have been nominated for the College of Engineering’s “best dissertation” award.

Additionally, Mukherjee tirelessly helps his students prepare for their careers, and actively involves himself in their job searches.

Mukherjee obtained his undergraduate degree in electronics and electrical communications engineering — with honors — in 1980, at the Indian Institute of Technology, Kharagpur, in his native India. He then moved to the United States and obtained back-to-back master’s degrees in computer science and electrical engineering, both at Southern Illinois University, Carbondale. This was followed by a Ph.D., also in electrical engineering, from the University of Washington, Seattle. Immediately upon completing his doctorate, in 1987, he joined the UC Davis College of Engineering.

He quickly established a strong reputation for his work with optical networks and security protocols: specifically, lightwave networks, with the goal of developing novel architectures, protocols and algorithms for the next generation of high-speed networks designed to exploit wavelength-division multiplexing (WDM) optical technology; network intrusion detection, with the goal of detecting network software vulnerabilities and attacks in real time; and wireless and sensor networks. Mukherjee became renowned for his knowledge in these areas, and has become a popular speaker at optical networking conferences throughout the world. He recently served as general co-chair of the 2011 Optical Fibers Communication Conference, held in Los Angeles, and gave keynote/plenary talks at similar conferences held in Cartagena, Spain, and Stockholm, Sweden.

He also has been a prolific author during his quarter-century at UC Davis, with a staggering list of published articles and research papers to his credit. His graduate-level textbook, 2006’s Optical WDM Networks, remains an invaluable resource to this day; the 956-page book is part of Springer’s Optical Networks series, which Mukherjee edits. He also serves — or has served — on the editorial boards of eight journals, including IEEE/ACM Transactions on Networking and IEEE Network. He was made an IEEE Fellow in 2006.

He served as chair of the UC Davis Department of Computer Science from 1997 through 2000, and in 2005 was appointed to the College of Engineering’s Child Family Professorship, an endowed position that was established to foster academic excellence and innovative research in “the interrelationship of engineering and entrepreneurship.” Upon receiving that professorship, Mukherjee was cited as “an outstanding scholar and teacher, (with) the key industry connections that carry his academic research to practical application.”

Outside academia, Mukherjee was a five-year founding member of the board of directors of IPLocks Inc., a Silicon Valley startup. He also served on technical advisory boards for several other networking startups, including Teknovus, Intelligent Fiber Optic Systems, and LookAhead Decisions Inc.

Somehow, Mukherjee also finds time for several sporting activities each week, with regular games of soccer and squash. In that realm, he’s proudest of his long affiliation with the Davis Cricket Club and the Northern California Cricket League; he’s quick to regale listeners with a memorable game that took place on June 8, 1997, when he and a teammate recorded an unbroken, 280-run opening partnership in an NCCA “B” League game. As a result of that remarkable performance, Mukherjee earned that year’s “B” League Single-Inning Batting Trophy: an honor he probably cherishes just as much as — if not more than — his many academic awards.