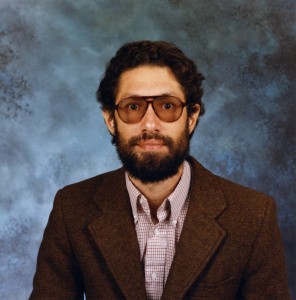 In 1984, fledgling computer animator John Lasseter’s short film The Adventures of André and Wally B drew plenty of attention; when he then directed Luxo Jr. in 1986, the upstart company dubbed Pixar was well on its way. Both films were praised for the manner in which CGI visualized real-world objects and environments.

Nelson Max, a professor in the UC Davis Department of Computer Science, beat Lasseter by several years. His 1981 short film, Carla’s Island, is recognized today as one of the first to animate ocean wave action via CGI. The lapping water was merely one of this film’s ground-breaking charms; as the action shifted from a tranquil blue sky to an approaching storm, Max incorporated the resulting change in the light reflected from the waves.

One could attempt to argue that Lasseter’s career actually began with his California Institute of the Arts student films: Lady and the Lamp (1979) and Nitemare (1980). But Max wins that contest as well; his first seminal film, Space Filling Curves, was released in 1972 as part of the National Science Foundation-sponsored Topology Films Project, which under Max’s guidance produced computer-animated educational films on mathematics. Another of his efforts for the Topology Project, 1976’s Turning a Sphere Inside Out, has been hailed as one of the classic early CGI films. Both these early efforts profoundly influenced a generation of young scientists, by helping them see the wonders of mathematics, while also demonstrating the potential of computer graphics to convey deep ideas.

Max earned his undergraduate degree in math from Johns Hopkins; this was followed by a Ph.D. in math (topology) from Harvard University in 1967. His early academic career began at Cleveland’s Case Western Reserve University and Carnegie Mellon University. He joined the Lawrence Livermore National Laboratory in 1977, where he became a computer scientist in the Mainframe Graphics Group; he also began teaching math and computer graphics at UC Berkeley and UC Davis. As the years passed, he began to divide his time equally between UC Davis and the Lawrence Lab. At the latter, he produced a series of molecular structure animations that amplified the value of CGI in scientific visualization; the most famous of these films include DNA with Ethidium and Doxorubicin/DNA.

Hard-science-fiction author Greg Bear was among the many admirers of such work. “Using his graphics programs, Nelson has been able to predict how molecules will interact beforelab tests have been made,” Bear observed, in early 1984. “He also has investigated the effects of mutagens on DNA, and modeled the structures of very tiny viruses.”

Max formally describes his research interests as scientific visualization, computer animation and realistic computer graphics rendering, including shadow and radiosity effects; in visualization, he works on molecular graphics, and volume and flow visualization, particularly on irregular finite element meshes. During a career that has run close to half a century, he has produced a remarkable body of research and has steadily published papers in journals and for major CGI visualization conferences, and particularly for the Association for Computing Machinery’s Special Interest Group on Computer Graphics and Interactive Techniques (ACM SIGGRAPH).

If that sounds a bit too theoretical, his extracurricular activities have cemented his fame among CGI fans and cognoscenti. Max has three IMAX films to his credit at the Internet Movie Database: He served as computer animator for The Magic Egg (1984) and We Are Born of Stars (1985), and he co-directed Echoes of the Sun (1990) with IMAX co-founder Roman Kroitor. Two of these Omnimax films were made while Max served as the computer graphics director for the Fujitsu pavilions at Japan’s Expo ’85, in Tsukuba; and ’90, in Osaka.

Echoes of the Sun blends graphics and computer puppet characters to depict photosynthesis; viewers are shrunk down to molecular size in order to travel with a water molecule during its journey toward energy production. The Magic Egg, in turn, has been hailed as a “computer-graphics Fantasia.”

Additionally, Max was one of many CGI pioneers profiled in the 1982 Disney TV documentary, Computers Are People Too!

Along the way, Max has collected numerous honors for his work. He was presented with the Steven A. Coons Award in 2007, the highest honored accorded by ACM SIGGRAPH, for outstanding creative contributions to computer graphics. The award “recognizes his work in pioneering scientific visualization, his deep technical contributions, and his generous participation in the encouragement and stimulation of ideas and intellectual exchange in computer graphics.” ACM more recently named him a Fellow in 2011, for his “contributions to visualization tools and computer animation.” Max also is a member of Eurographics and the IEEE (Institute of Electrical and Electronics Engineers) Computer Society.

John Lasseter may have Oscars on his shelves, but Nelson Max has the greater satisfaction of knowing that his pioneering efforts and ongoing research have paved the way for future generations of Lasseters.

Opus Number Three: A Symphonic Relationship Between Engineers and Winemakers