Center to clear the air on aerosols’ climate change impact

In some ways, aerosols are the new CO2. Carbon dioxide has earned enormous attention from scientists and the general public regarding its role in climate change. But aerosols – those tiny particles found in clouds, haze, dust, smog, smoke and sea spray – also add up to equal a big impact on the climate, and people are starting to notice. Yet, aerosols are poorly understood.

The National Science Foundation is providing an influx of funding, $20 million over the next five years, to enhance that understanding through its support of the Center for Aerosol Impacts on Climate and the Environment (CAICE). The award was announced today, Sept. 9, at a press conference at UC San Diego, where the center was recently established.

The center will leverage the expertise of 23 top scientists from nine universities to determine how aerosol particles released from the ocean influence regional and global climate. Among those scientists is UC Davis civil and environmental engineering professor Chris Cappa.

Cappa became a member of the scientific team due to his experience with instruments that measure how particles interact with sunlight and water in the atmosphere.

“Aerosol particles play a major role in the Earth’s atmosphere,” Cappa said. “Whereas greenhouse gases tend to warm the planet, particulate matter – and sea spray in particular – has a cooling effect. That offsets some of the warming of the greenhouse gases. Characterizing how large that offset is, is critical to determining how much the planet is expected to warm in the coming decades or centuries.”

“Carbon dioxide is pretty much the same thing wherever you measure it,” Cappa said. “But each aerosol particle is a unique mixture of compounds. Understanding that diversity and the implications of that complexity is part of what this center is about.”

Initially, the center will focus on sea spray’s effects on climate, including its indirect effects on cloud formation and precipitation. 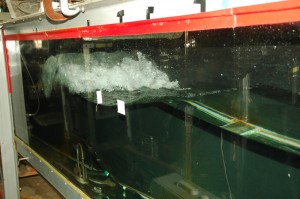 The ever-changing nature of the ocean makes sea spray measurement difficult and controlled experiments nearly impossible. To get around this, the center’s team members created a microcosm of the ocean system in the laboratory. Instruments arrayed along a 108-foot-long flume filled with water piped from the Pacific Ocean precisely measure the chemical properties of sea spray generated by breaking waves. This allows researchers controlled manipulation of the system. Both seawater and the air above, enclosed by a dome, can be modified and measured, enabling researchers to isolate individual factors to determine their influence on the chemistry of aerosols, and therefore climate.

“With this major new funding, we can now add human influences to our system — by spiking it with pollutants, changing the temperature, or increasing carbon dioxide levels, as examples,” said CAICE director Kimberly Prather.

The Center for Aerosol Impacts on Climate and the Environment is being led by UC San Diego’s Department of Chemistry and Scripps Institution of Oceanography. It will be eligible to receive an additional $20 million in funding in 2018.

“Fundamental research is absolutely essential to making important scientific discoveries and answering today’s most pressing scientific questions,” said Jackie Gervay-Hague, director of NSF’s chemistry division and a UC Davis chemistry professor. “In this case, this award supports an interdisciplinary team of scientists who will be able to continue to address important and challenging climate issues.”