EXPLORER – the world’s first total-body PET scanner – has now been used to scan about 200 patients and 65 research subjects. Developed by Simon Cherry and Ramsey Badawi, professors in the biomedical engineering department, EXPLORER can scan up to 40 times faster than current PET scanners along with a much lower dose of radiation – up to 40 times less – making it safer for patients. With the ability to scan the whole body in as little as 20 to 30 seconds, “We can now interrogate the whole body at the same time and get information on the body operating as a system, and not just a single organ,” said Badawi.

Of the 200 patients scanned so far using EXPLORER, dozens have been cancer patients. Among them are Magdalena Gonzalez, who has large B-cell lymphoma, and Ebony Brown, who has breast cancer.

Gonzalez was treated for thyroid cancer nine years ago. During a recent tonsillectomy, surgeons discovered another cancer, which turned out to be advanced B-cell lymphoma. The tumors were so large that they obstructed her airway and esophagus. Her UC Davis Health oncology team thought she could be a good candidate for EXPLORER to better stage her lymphoma and determine the best course of treatment.

Gonzalez, a 49-year-old mother of seven, became the first clinical patient in the world to be scanned on EXPLORER at the new EXPLORER Molecular Imaging Center on Folsom Boulevard in Sacramento. Badawi was there to meet her. “I hope this will help find out what is going on with me,” Gonzalez told him before the start of the scan. “I am happy I was selected for this experience.”

Brown, 44, was diagnosed with breast cancer in 2016. The mother of four had a lumpectomy and surgery to remove 20 lymph nodes, plus chemotherapy and radiation treatment. But during chemotherapy treatment doctors found something new under her arm. A biopsy suggested it was more cancer, and her doctors recommended more surgery.

She rejected the idea, afraid of the potential side effects. Instead, she decided to go with radiation treatment.

In February 2019, a PET scan appeared to show that the radiation treatment had worked, but was not definitive. In September, it was time for another PET scan. Her oncologist thought she’d be a good candidate for EXPLORER.

While her 13-year-old son played video games in the lobby, she was led into the EXPLORER imaging room. She laid on the scanner bed quietly for 20 minutes while it worked to find signals of potential tumors in her body. The scan was then repeated later in the hour. Within two days, she had her results. “This is a much clearer image,” said UC Davis Health radiologist Lorenzo Nardo. “We can say with 99% certainty that this is negative for cancer.” 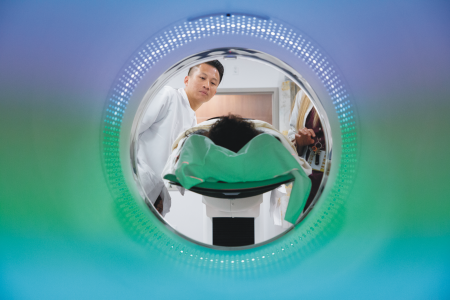 What’s next for EXPLORER?

While the research program is currently on hold due to the COVID-19 pandemic, the EXPLORER team continues to scan cancer patients who are in need. There are currently ten research protocols that are active or had started enrollment prior to COVID-19 – all designed to increase understanding about how to maximize the potential of EXPLORER to refine a diagnosis, track a disease course and monitor treatment effects.

“We already have a wide range of research projects approved or under way,” said Cherry. “These cover a diverse number of disease areas including cancer, cardiovascular disease, liver disease and multi-organ inflammation, as well as studies in healthy, normal subjects that establish important baseline data on this new technology.”

They are also working on a collaborative study with Dr. Timothy Henrich, University of California, San Francisco, to use a new imaging agent they developed that binds to the HIV virus.

“I don’t think it will be long before we see a number of EXPLORER systems around the world. But that depends on demonstrating the benefits of the system, both clinically and for research.”

The Algorithm Will See You Now: Chen-Nee Chuah and Xin Liu on Big Data, AI and Machine Learning in Medicine

Your Flying Taxi is Almost Here