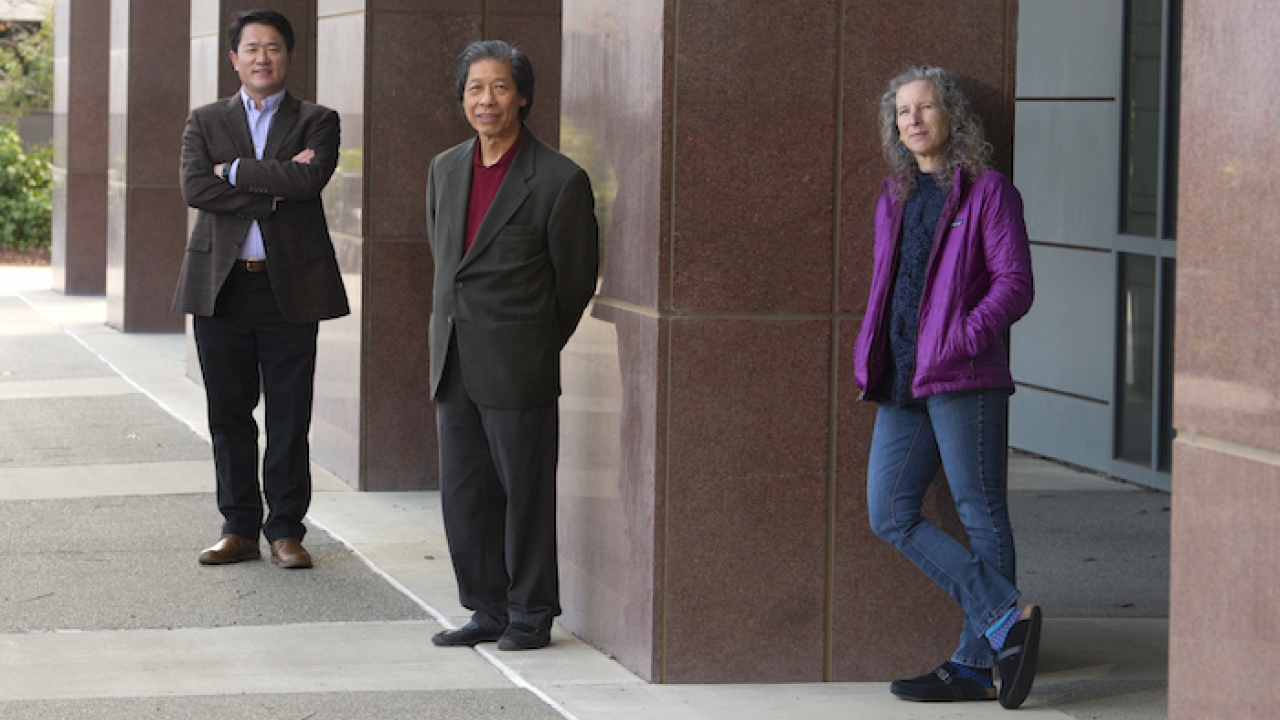 AV grafts are synthetic medical tubes that are surgically placed in a renal patient’s arm or leg. During dialysis, the AV grafts provide easier access to an artery and vein and better blood flow.

According to the National Institutes of Health, more than 661,000 people in the United States have kidney failure, with approximately 468,000 receiving dialysis. Wang wondered if it might be possible to decrease AV graft failures by creating an environment inside the tubing that mimics the body’s own natural vascular system. Essentially, what if the tubes could be made to resemble a vein or artery on a microscopic level?

“The idea was to use the graft to grow a new vascular environment,” said Wang. “I was interested in finding a method to optimize the surface of the tubing to be biologically smart.”

Lam is a professor and the chair of the UC Davis Department of Biochemistry and Molecular Medicine. He invented a chemistry method known as “one-bead one-compound” (OBOC) combinatorial technology, which allows for the rapid synthesis and screening of millions of chemicals at a time. As part of his earlier research, Lam used the OBOC technology to identify several chemical compounds that target various cancer cells. He successfully used some for cancer imaging and drug delivery. Some of the compounds Lam identified also bind to endothelial cells.

“We were able to leverage the existing research to identify several compounds that could be used to attract endothelial cells,” said Lam. “This allowed us to quickly focus on compounds that would be appropriate for the specific requirements of the AV graft.”

One challenge Wang and Lam faced is that endothelial cells have certain binding properties similar to platelets — small cell fragments in the blood that form clots. So first, they had to eliminate any compound that could attract platelets. In addition, they needed to find a safe compound that attracted endothelial cells but not other circulating blood cells.

Attracting other undesirable cells could promote the narrowing of the tube. To identify these compounds, Lam and Wang synthesized several candidate compounds, each separately on tiny microbeads. They then tested the ability of these microbeads to capture endothelial cells, platelets and other blood cells.

Wang describes the molecule he and Lam eventually identified as “just sticky enough.”

“These molecules function like the kid’s toy, Sticky Hands,” said Wang. “These ‘sticky hand’ molecules, coated on the inside surface of the implanted graft, grab only endothelial cells and endothelial progenitor cells from circulation. They essentially create a living endothelium on the graft.”

Wang and Lam began working with Alyssa Panitch, a professor in the UC Davis Department of Biomedical Engineering, on applying the “sticky hand” molecules to vascular applications.

Panitch’s lab focuses on vascular technologies to improve interactions between blood cells and the vascular wall to improve healing after vessel injury and control the inflammatory response.

“They immediately saw parallels between their research and the research I was doing,” said Panitch. “Expanding my work to improving the interface between synthetic grafts and blood was a natural move.”

Panitch also brought her experience as an entrepreneur to the team, having been involved in the launch of three startups, including Symic Biomedical Inc.

“Startups are a great way to nurture these technologies and bring them greater visibility. It’s a way to gain resources for commercialization and to get access and interest from medical technology companies,” said Panitch. “It is always exciting to push technology that you believe will improve human health out the door.”

In 2020, Wang entered the innovation into a contest sponsored by the Kidney Innovation Accelerator. The public-private partnership between the US Department of Health and Human Services (HHS) and the American Society of Nephrology (ASN) is designed to accelerate innovation in preventing, diagnosing and treating kidney diseases.

In August 2020, Wang won the contest and was awarded $500,000 to continue developing long-lasting vascular grafts.

The team received support from Venture Catalyst. Wang was a STAIR Grant recipient and participated in the Biotech Innovation Gallery (BIG) Accelerator. The BIG Accelerator program provides campus innovators and UC Davis-associated startups with industry mentoring, business model and investor pitch coaching and assistance in preparing to engage with investors. Wang also showcased the technology during the JP Morgan HealthCare conference in 2020.

The startup is in a very early stage. “There is still a lot of technical, detailed troubleshooting work to get this prototype from the lab to a manufacturer,” explained Wang.

The company is focused on improving AV grafts for dialysis patients, but the technology may have applications for other medical devices and implants, minimizing blood clot formation and infection.

“This is a biomaterial-based strategy,” said Wang. “I used the term ‘living endothelium.’ Even though the device doesn’t have any live cells, eventually it will have live cells on top of it and support endothelial cells to live long. More importantly, those will be the patients’ own cells, so there’s no rejection and no donor matching needed,” he said.

Bill Tucker is the interim associate vice chancellor for Innovation and Technology Commercialization and oversees Venture Catalyst. “VasoBio is a terrific example of UC Davis’ culture of interdisciplinary innovation. Faculty with expertise in biology, engineering and chemistry pooled their knowledge and resources to devise a novel medical technology.”

“By identifying a potential solution for the high failure rate of AV grafts, they may be able to improve treatment for the hundreds of thousands of people in the United States who receive kidney dialysis,” said Tucker. “We are happy to have helped launch VasoBio and supported the company with our Venture Catalyst programming. We look forward to following the progress of this exciting technology.”

Cyborg Cells Could Be Tools for Health and Environment